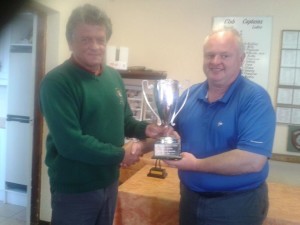 The Westmeath Matchplay Championships were held last Sunday in Collinstown for the second successive year. The home venue carried a lot of hope for home success and indeed that proved to be the case. In the Senior section Liam Buckley brought home the cup for his first Westmeath Matchplay title. Liam had been beaten in the semi-final of this championship last year by fellow club mate John Browne – who went on the win the title. Therefore Liam entered into this year’s championship with renewed determination to go two steps further.

His opening match was a potential banana skin when he had to play a former champion in Custume’s Michael Foley. Michael had already eliminated Anthony Browne in a preliminary match and was well up for the task ahead. Liam however stamped his authority on the match early on and took a lead that he was never to surrender. He eventually ran out the winner with holes to spare. Next up for Liam (or “Clem” as he is affectionally known around the Glenidan area) was his brother Michael in the quarter finals. This promised to be a mammoth battle between the two Collinstown stalwarts but unfortunately it did not turn out to be. Michael was forced to conceded the match early in the opening round through illness which gave Liam passage through to Sunday morning’s semi-final.

Again Liam was to meet a club mate in the semi-final, this time it was the legendary Alan Hanlon. Alan’s form all season has been consistant and this was never going to be an easy task for Liam. Indeed when he went 5 down after the opening 7 holes it was beginning to look like he might fall again at this hurdle as had happened last year. But successive birdies on 8, 9 and 10 brought Liam right back into the match and when he had momentum, he kept driving forward. Alan could find no answer and eventually Liam closed out the match 4&3.

And so he had one more hurdle to overcome – Pat Malone in the final. Pat has been arguably Westmeath’s best player this season, already beating Liam into second place in the Westmeath Strokeplay, so this again was going to be a mammoth task. Liam however did not make the same mistake as the semi-final and this time he stormed out of the blocks. He recorded 11 birdies in the opening 18 holes to lead by 5. He stretched this lead to 7 early in the second round and really he was comfortable from there in. In the end, Pat managed to get the match to the 14th but he had no answers to the birdie feast that Liam produced.

In the Intermediate section we also had a new Champion from Collinstown when Stephen Ruane finally won this title after previously losing three finals.  Stephen had a walk-over in his first round match but faced the daunting task of playing the defending champion Paddy Browne in the quarter-finals. The early stages of the match was nip and tuck but Stephen then birdied 5 in a row to take command of the match. Browne, as you would expect, never gave up but Stephen kept him at bay and ran out a 6&5 winner.

Sunday morning’s semi-final saw Stephen up against Damien Mullins from Kilbeggan. Damien, a former senior player, was always going to be a sticky opponent but once again, Stephen was up to the task and won through to his 4th Intermediate Matchplay final.

Stephen’s opponent in the final was the current Leinster Intermediate Matchplay champion, Dessie Baker from Lough Owel. Dessie has taken Westmeath Pitch & Putt by storm this year and was certainly the pre-tournament favourite for this championship. But if Stephen Ruane is anything – he is dogged in matchplay. Dessie threw the kitchen sink at him in the opening round but still only led by 2 after 18. Stephen then proceeded to win the opening 2 holes of the second round to tie the match up. Momentum had swung and Dessie was shaken. Stephen kicked on to slowly build a lead that eventually saw him close out the match on the 16th. Both of our champions were overjoyed with their wins and the Collinstown club would like to congratulate them on magnificent victories.

Unfortunately we had no luck in the Gents Junior section or the Ladies division.